I had no idea my new tub of grease was such a vintage staple. Though my first introduction to Three Flowers Brilliantine happened yesterday by chance at Wal-Mart, apparently it's an old-faithful product line with nearly a hundred years on shelves internationally, particularly in Hispanic/Latino communities: 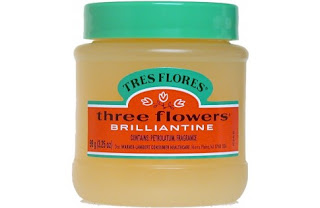 My results from the first grease twist out were good, as you can see on the video. I still get better twist-out definition from Curls by Sisters Smith Curly Pudding, but the softness of using grease as a sealant -- this is what makes it a winner for me. Plus, I don't care as much as I used to about curl definition. Explode that curl, sculpt your hair!

Some say grease isn't recommended for fine hair, but I think it depends on what kind of grease you get, how you use it, and the viscosity and weight of it. TFB is light-weight and slick, and a little goes quite a long way. Another thing I noticed while putting the twists in (on lightly misted damp hair, of course) was how the tangles I did have just melted away in my fingertips. Wow, now I can see why Mom used it so consistently.

*Hanging my head in shame* I have officially unlearned my lesson, the one I picked up from years of looking at hair blogs, fotkis, and YTubers. I thought the best approach for me to take was avoiding the stuff I used when my hair was relaxed, and even the stuff my sweet mom used on my hair when I was a kid, but I admit I was incorrect. Petrolatum is not the devil. But there is a right way and a wrong way to apply it.

Here's an article about how to use grease, some videos by someone who tested it in her hair for a month, and (just in case you've been under the rock with me, lol) CurlyNikki's post about her new-found admiration for it.

For those of you who knew about this grease thing all along, thank you for gracefully holding back your "I told you so, you fancy-pants newbie natural!" I still don't think I'll ever go back to the Pink Lotion, but I also never thought I would use grease, so... ?
Posted by Unknown

Blogs on My Radar